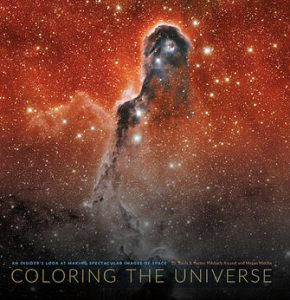 Coloring the Universe: An Insider’s Look at Making Spectacular Images of Space by Dr. Travis Rector, Kimberly Arcand & Megan Watzke. This is a coffee-table astronomy book with a difference: the processing behind the beautiful astronomical images we’re now so familiar with, is revealed. This book is actually very readable and enjoyable, thanks to the authors’ amenable presentation, not assuming much scientific background of the reader.

If you look up at a clear night sky with your unaided eyes (save for spectacles) you’ll see some objects such as the Moon, planets, and stars. You’ll notice that they are white(ish) or slightly colored, say reddish or bluish. You’ll probably feel confident that if you could magically get much closer to one of these objects, it would still be more or less the same colour. And in fact, you can effectively ‘get much closer’ to a star or planet by looking through a telescope. So, Mars looks reddish to the unaided eye, and continues to look reddish through an amateur or professional telescope.

But what happens when you view the Universe through a big telescope on a mountain top (such as Kitt Peak in Arizona), or through a space telescope such as Hubble? You no longer have an eyepiece to look through (astronomers don’t have to be astronauts too!); the image now comes via colour filters and electronics such as CCDs and computers. There will have been digital processing to a greater or lesser degree, depending on the scientific objectives of the astronomer. So are the beautiful pictures from Hubble and the other observatories (such as KPNO on Kitt Peak) faithful or fake? And how can it be possible to make pictures from telescopes that observe outside the range of visible light, such as the X-ray observatory Chandra? This fascinating book takes you behind the scenes into the astronomer’s world, and explains in layman’s terms how the images are created and processed, and how faithful they are to what you’d actually see ‘up close and in person’.

With a fleet of telescopes in space and giant observatories on the ground, professional astronomers produce hundreds of spectacular images of space every year. These colorful pictures have become infused into popular culture and can found everywhere, from advertising to television shows to memes. But they also invite questions: Is this what outer space really looks like? Are the colors real? And how do these images get from the stars to our screens?

Coloring the Universe uses accessible language to describe how these giant telescopes work, what scientists learn with them, and how they are used to make color images. It talks about how otherwise un-seeable rays, such as radio waves, infrared light, X-rays, and gamma rays, are turned into recognizable colors. And it is filled with fantastic images taken in far-away pockets of the universe. Informative and beautiful, Coloring the Universe will give space fans of all levels an insider’s look at how scientists bring deep space into brilliant focus.

Video by Open Lens Productions / Jonathan VanBallenberghe
Producer’s notes:
When the video producer’s task is to showcase a book full of stunning images, the video itself needs to be full of
concentrated, potent visuals. I used a full-fisheye lens to capture the inner workings of the telescopes.
To me, this reinforces both the behind-the-scenes feel we were going for and the idea that the book
is a story about unique optics. I used my new handy-dandy dji osmo for the driving and walking shots.
Some of the time lapse sequences were shot by Travis, some by me. In this day and age when we see
time lapses in almost every production, I wanted to use them sparingly. They make sense here, in my opinion,
since astronomy entails long, long nights of watching, waiting, and collecting data.

← Barcodes in the Stars: Stellar Spectroscopy
Hello World 2, in Python 3 →