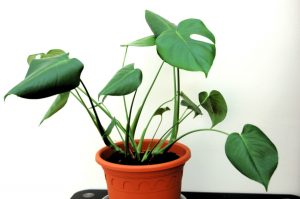 Monstera deliciosa is commonly grown for interior decoration in public buildings and as a houseplant. It grows best between the temperatures of 20–30 °C (68–86 °F) and requires high humidity and shade. Growth ceases below 10 °C (50 °F) and it is killed by frost. In the coastal zones of Sicily, especially in the Palermo area, where it is called “zampa di leone” (“lion’s paw”), it is often cultivated outdoors. In ideal conditions it flowers about three years after it is planted. Flowering is rare when grown indoors. The plant can be propagated by taking cuttings of a mature plant or by air layering. The Monstera deliciosa is a plant with rapid and vigorous growth. As a result, it is widely used as an ornamental plant in the tropics and subtropics. Its ease of cultivation also makes it a very widespread plant in apartment in temperate regions.