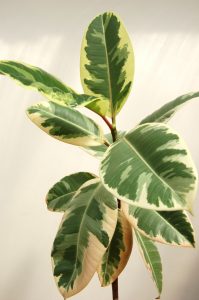 Ficus elastica is grown around the world as an ornamental plant, outside in frost-free climates from the tropical to the Mediterranean and inside in colder climates as a houseplant. Although it is grown in Hawaii, the species of fig wasp required to allow it to spread naturally is not present there.

Most cultivated plants are produced by vegetative propagation. This can be done by cuttings or by layering. This last method consists in notching the stem of the plant. The wound, which leaves the latex of the plant oozing, is coated with cuttings hormones and tightly wrapped with moist foam. The hole is covered with a plastic film and left a few months at the end of which new roots have developed from the axillary buds. The stem is then weaned and the new plant can be repotted.

All parts of the plant contain an abundant milky white latex, which has been tested for use in the manufacture of rubber, but without economic and technical results; the rubber is actually produced from the sap of the rubber tree .

In cultivation, it prefers bright sunlight but not hot temperatures. It has a high tolerance for drought, but prefers humidity and thrives in wet, tropical conditions. Ornamental hybrids (such as Robusta) have been derived from Ficus elastica with broader, stiffer and more upright leaves than the wild form. Many such hybrids exist, often with variegated leaves.